After several years of research into the mechanism of the drawbridge at Gate 26, the ATM association has begun work on the reconstruction of the mechanism of this so-called "Zig-zag" drawbridge, which is unique in France. The association called on Christian Corvisier, an architectural historian, and Stéphane Berhault, an architect, (Aedificio agency) for the project study. The project was entrusted to local craftsmen, the master wrought iron worker Jean Michel Grès, for the supervision of the site, as well as the wrought iron worker and blacksmith Claude Duteil (Toutomarto).

The mechanism as a work of art

The ironworkers employed two traditional assembly techniques. Hot riveting, used for the Eiffel Tower, was used for the assembly of the beams by Jean-Michel Grès and the initially cylindrical operating arms were worked by fire hammering by Claude Duteil.
This restoration of the Zig-Zag drawbridge is partly restitutive, for the general mechanical principle, but also creative, innovative, for the aesthetics of the metal parts.

In 1860, the Sisteron Citadel had three Zig-Zag drawbridges. One to the north to improve the defence of the access to the great entrenchment, two to the south, built according to Captain Noël's project, to replace the awkward access from the arrow drawbridges and the steep and tortuous ramps which were inconvenient for transporting the cannons. The zig-zag drawbridge is a metal structure that moves by the effect of a pendulum.

Animation: the operation of the drawbridge. 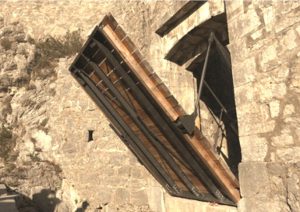